Here is the second set of "Miscellaneous" caps.

The little series below comes from a bit of interview in which Elijah Wood is remarking on the challenges of playing the Cirith Ungol ledge scene (in which Sam is sent home). It's a rather ill-lit, badly-focussed sequence, but I like the happy, light look on Elijah's face as he speaks, and I never tire of his profile, of which there are few sustained shots throughout the actual three films.

They were only beginning the filming of FotR in 1999 when there were big floods in Queenstown. No exteriors could be shot and no filming spaces of size were available to re-create larger scenes indoors. They settled on building the rocky ledge for this scene in a squash court at a motel and shooting this late-in-the-story episode out of sequence. Neither Wood nor Astin wanted to have his coverage shot first, since they still were wrapping their minds around their characters at the opening of the story. A coin was tossed. Astin's coverage would be shot first.

During this series of frames Elijah is explaining how difficult it had been to do; to jump into such a highly-wrought scene, before they had played any scenes from TTT or RotK, but also to imagine Gollum. They had not yet had a scene with Gollum, and there was no Andy Serkis. (Imagine: this scene was shot before the Emyn Muil!) He had not yet been cast. Andy Cook, director of animation, played Gollum (very well, too), jumping about with a script, doing Gollum's blocking and lines.

What I find interesting re-examining this bit of documentary footage is that Philippa, Fran and Peter Jackson from the beginning of shooting had conceived of this scene ("to up the ante") in which Frodo and Sam are made to do this out-of-character departure from book canon -- doubly out of character since not only does Frodo send Sam home, Sam ("I made a promise never to leave you, Mr. Frodo!") actually goes!

I think that because I knew they were constantly rewriting the script as they went along, adding this, tossing that, that this scene was an ill-judged later effort to increase the tension between these characters. But, no, this had to have been in the original script.

I am one of the few viewers who actually enjoys watching this scene on account of the acting and camera work which is absolutely excellent. It works dramatically within the adapted story as conceived by the director and writers -- that is with a Frodo who can get into irrational snits and a Sam who would actually be bullied out of keeping a promise. But each time I watch it, once the scene is over and the spell of the acting is broken, my mind and sensibilities snap back to narrative-sanity and I wonder, "How could they do that?" 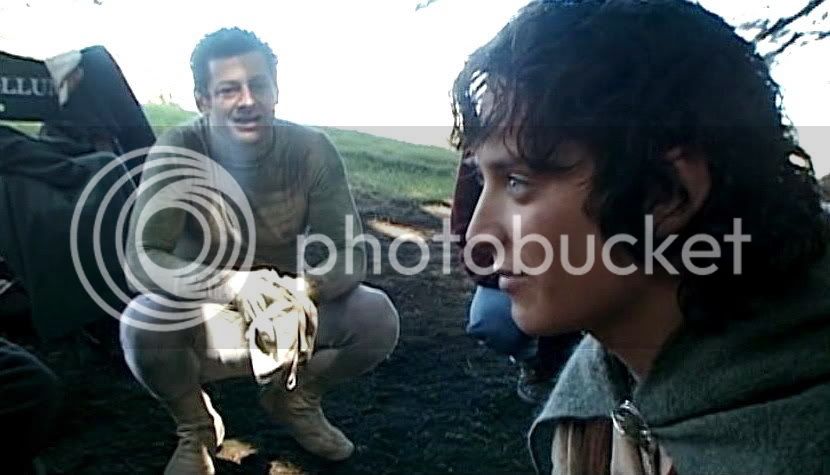 Below are two caps that come from the very next sequence, in which it is explained that because the weather suddenly cleared up, they went back to shooting outdoor sequences from FotR before they could shoot Frodo's coverage in the ledge scene. Therefore, it was another year before Frodo's speeches and reaction shots were filmed. That must have felt pretty odd! I enjoy all the more, therefore, watching this problematic scene knowing that Frodo had aged a year each time he answered one of Sam's or Gollum's remarks.

I loved the look of Frodo in these scenes enough to make these caps, even if they are a little distant and poorly focussed. As usual I brightened and focussed all these caps, but I could only do so much.


~ Frodo prepares to act his coverage in the "Go home Sam" scene, one year after Sam's was shot:

Last is another series of frames from the documentary, covering the filming of the farewell scene at the Grey Havens.

I am sure you all have heard how this was an emotionally wearing sequence to film: long and teary and draining. You also heard how after lunch Sean Astin neglected to put his waistcoat back on, and the footage shot was declared no good, since it didn't match (there is still one quick shot left in the TE in which Sam is sans waistcoat; it must have been the best take and PJ left it in). When the new footage was screened, however, it turned out to be out of focus. PJ had to break the news to them that they would have to act the scene yet again the next day.

: Sean was castigated by all, of course, although I think in this instance it was as much the responsibility of crew members as Sean; the continuity person and/or wardrobe person should have noticed this. They always have to check and make sure the actors' hair and make-up are the same from shot to shot; why not their costume pieces?
These caps are from one of the pieces of footage showing the hobbits waiting to continue the scene. Dominic Monaghan obviously slips out of character for this one, but it's only for a moment when the film is running.

I actually made these because I loved the subtle shift of mood on Frodo's face -- for he is Frodo here -- he and Billy Boyd clearly have remained in character. Believe it or not, I didn't even notice the silly face Dom made until after I had made the caps. Talk about being a fan who only has eyes for Frodo!


~ Pippin, Merry and Frodo wait to continue filming the farewell at the Grey Havens: 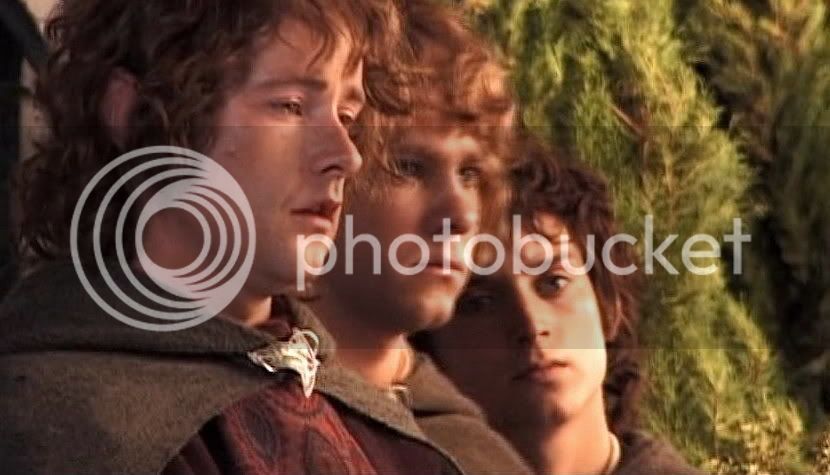 Table of all screencap entries here.